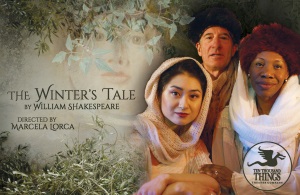 An epic tale that takes you from the tyrannical power of jealousy, to the promise of renewal, through magic, miracles and the quality of forgiveness that only true love can bring.

"Amazing, just magical, I couldn’t imagine when I came into this room, how immersed I would feel, and how lifted off the ground I would be.” – Attendee at YMCA Cora McCorvey

"It was such a glorious, joyful, heart filled experience. What a gift; thank you!" – Addie at Open Book

"Director Marcela Lorca has teamed with an extraordinary cast to craft a staging that still has me combing my memory of the last Shakespeare production I'd seen that succeeded so sublimely." - Pioneer Press

"I haven’t felt Shakespeare in that way for so so long… So proud to live in a community where artistry like this exists and is shared with such generosity." – Eric at North Hennepin Community College

"The Winter’s Tale was captivating. I really enjoyed the creativity in having the actors play different roles, not confined by gender or size or color. Brilliant. A role model for other theaters and for greater society. Well done!" – Susan at North Garden Theater

"This Winter's Tale is something you feel, and that touches you..." - Star Tribune

"A powerful, beautiful, spellbinding, toe-tapping performance!" - Play off the Page

"We were delighted in every way...the laughter, the many character and costume changes, the refreshing way of making Shakespeare so relevant and engaging." – Pamela at The Sheldon Theater (Red Wing)

"Ten Thousand Things does Shakespeare like no one else, making it accessible and understandable and relatable..." - Cherry and Spoon

"I really appreciated the diversity in the cast—when it got to the emotions of the play, everyone was one color, everyone was equal." – Attendee at St Paul Jewish Community Center

“So so so good. And I DID feel like I belonged in that room. Only one other time I’ve felt that in this whole building and that was when I saw y’all’s last play. I was in the room but not, ya know? So good. I’ll try and find y’all in March again. I’m LIFTED!” – Homeless Man at Open Book