The Good Person of Szechwan 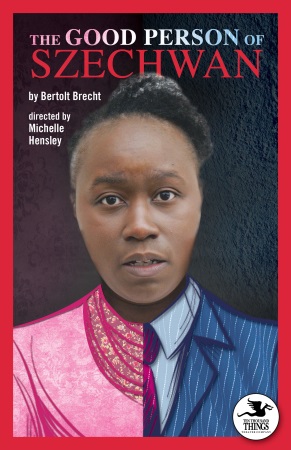 A tale, told with music and humor, of a poor woman who receives a bag of gold from the gods and is torn in two as she tries to help all her struggling friends but take care of herself at the same time.

"TTT at its TTT-iest:  Inclusive, thoughtfully detailed, studded with wonderful actors and fueled by a sense of fun." — Star Tribune

"I saw that beautiful black woman on the postcard, and I had to come. I don't get to see someone who looks like me in such an important part of anything." — Attendee at Hubbs Center

"We loved this play! It is so dark, but you always seem to find joy even in the midst of tragedy. It kept us talking all weekend." — Sarah at St Paul's ELCA

"I really loved how you told the story with the people and not the things. You didn't have much stuff or space, but you used it all so smartly and kindly." — Jeremiah at Avenues for Homeless Youth

"For 19 years, we have been thrilled to have been a part of TTT's audience. The uniqueness of the work draws us into the story. We laugh, we cry. We are touched by all the human emotions that surround us." — Marcia at Open Book

"Hensley's cast and crew handily delivers the goods in this production." — HowWasTheShow

"That was SO GOOD! I've never seen anything so close (indicates the stage) and so close (touches her heart)" — Attendee at YMCA at Cora McCorvey

"Whenever I see your shows, I feel more joy than I came in with, channels of joy that perhaps had gotten a bit buried from worry, or fear, or even just the day. I leave feeling more connected to the city, to the people next to me, to my identity as a woman, and my inner child." — Adeline at Open Book

"The production is sparkling with humor...delivered by some of the Twin Cities' most acting talent." — Talkin' Broadway