After the Show | Post-Play Discussion

“This is a fairytale, a fantasy. My purpose is to entertain an audience. I want people to have fun. I like it when they leave the theatre humming the tunes. The play is life-affirming and a celebration of family, love, tradition, and the groove. And by that I mean music that moves you, something that we can all tap into, regardless of race, ethnicity, and gender.” —Keith Glover, "Face to Face with Keith Glover," Simi Horwitz, Backstage, July 2, 2002 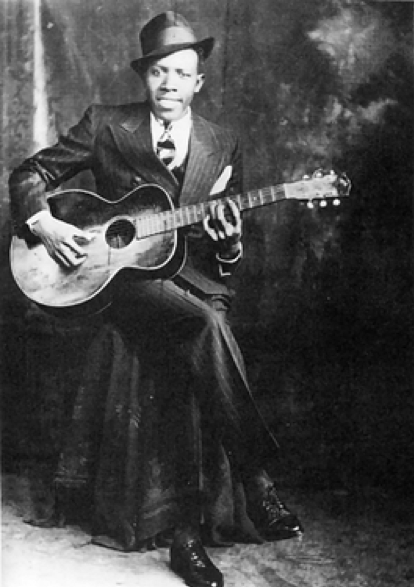 It’s 1966, in Bessemer, Alabama. We meet the Dupree family: Gertha (known as Good Sister for reasons that should be obvious); Dregster Dupree (her “boyfriend” and the twin brother of her late husband, Jaguar Dupree, Sr.); her son, Jaguar Dupree, Jr.; and his twin sister, Glory Dupree, who is blind — a happy family until Jaguar, Jr. returns home with the news that he has lost a piece of the family’s magic in a cutting contest (guitars vying for the best player of the Blues). When the shapeshifter and magical keeper of the Blues, Marvell Thunder, appears at the Dupree home needing a room, he brings with him supernatural powers and a high-stakes challenge that will change the Dupree family and Thunder himself in ways that will completely alter relationships and perceptions.

The blues is one of America’s most treasured music genres. The blues has with deep roots in American history, particularly African-American history. The blues originated on Southern plantations in the 19th century. Its inventors were slaves, ex-slaves and the descendants of slaves–African-American sharecroppers who sang as they toiled in the cotton and vegetable fields. It’s generally accepted that the music evolved from African spirituals, African chants, work songs, field hollers, rural fife and drum music, revivalist hymns, and country dance music.

The blues grew up in the Mississippi Delta just upriver from New Orleans, the birthplace of jazz. … Unlike jazz, the blues didn’t spread out significantly from the South to the Midwest until the 1930s and ‘40s. Once the Delta blues made their way up the Mississippi to urban areas, the music evolved into electrified Chicago blues, other regional blues styles, and various jazz-blues hybrids. A decade or so later the blues gave birth to rhythm ‘n blues and rock ‘n roll. No single person invented the blues, but many people claimed to have discovered the genre. For instance, minstrel show bandleader W.C. Handy insisted that the blues were revealed to him in 1903 by an itinerant street guitarist at a train station in Tutwiler, Mississippi. (see below) During the middle to late 1800s, the Deep South was home to hundreds of seminal bluesmen who helped to shape the music. … the legacy of these earliest blues pioneers can still be heard in 1920s and ‘30s recordings from Mississippi, Louisiana, Texas, Georgia and other Southern states.

This music is not very far removed from the field hollers and work songs of the slaves and sharecroppers. Many of the earliest blues musicians incorporated the blues into a wider repertoire that included traditional folk songs, vaudeville music, and minstrel tunes. … Most blues music is comprised of 12 bars (or measures). A specific series of notes is also utilized in the blues. The individual parts of this scale are known as the blue notes. Well-known blues pioneers from the 1920s such as Son House, Blind Lemon Jefferson, Leadbelly, Charlie Patton and Robert Johnson usually performed solo with just a guitar. Occasionally they teamed up with one or more fellow bluesmen to perform in the plantation camps, rural juke joints, and rambling shacks of the Deep South. …

Today there are many different shades of the blues. To name just a few: Traditional county blues: A general term that describes the rural blues of the Mississippi Delta, the Piedmont and other rural locales; Jump blues: A danceable amalgam of swing and blues and a precursor to R&B; Boogie-woogie; Chicago blues: Delta blues electrified; and Cool blues: A sophisticated piano-based form that owes much to jazz.