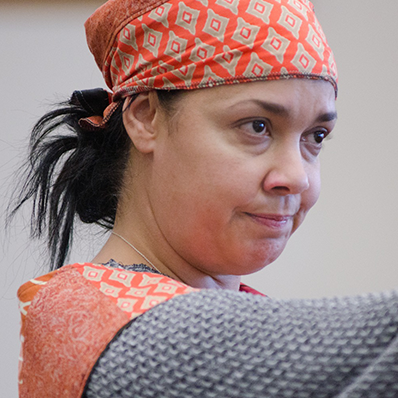 George was previously seen at Ten Thousand Things in Intimate Apparel, Park and Lake, Henry IV Part I, The Unsinkable Molly Brown and The Queen Stag. George is a Twin Cities based actor who has performed at the Guthrie Theater, Mixed Blood Theater, Penumbra Theater, Children's Theater Company, Interact Theater, Pillsbury House Theater and Hey City Theater where she improvised a wedding 8 times a week for almost 10 years. "Ten Thousand Things provides my favorite performing environment. I thrive most in an improvised show, but when you also have an audience that improvises then you really have the most imaginative creation possible on earth. I love truly coming to a different understanding with each individual audience - as if each show has its own private conversation about politics OR family OR social justice. It keeps me young and yearning for more experiences like this."